The Importance of Sleep for Teenagers

Are your students falling asleep in morning classes? Sleep research shows that a teenager needs between nine and 10 hours of sleep every night. Yet most teens are sleeping only about seven or eight hours a night on average. Chronic sleep deprivation can lead to reduced alertness and concentration, poorer academic performance and feelings of sadness and irritability.

Andrew Fuller, a clinical psychologist who specialises in the wellbeing of young people and a MindMatters panellist, explains the physiological impact of sleep on our brains: “Getting enough sleep is one of the most powerful ways we can protect ourselves against depression. The structures in the brain that support the most powerful antidepressant, serotonin, are built and re-built between the sixth and the eighth hour of sleep.

“Adolescents are often sleep-deprived which may in turn increase vulnerability to stress,” says Fuller.

MindMatters Module 4.1 talks about how schools help students by creating a mentally healthy environment. There is a range of lifestyle factors that can be modified to support young people’s wellbeing.

Dr Alexandra Parker from the National Centre of Excellence in Youth Mental Health emphasises the importance of simple lifestyle interventions. “Support young people in having some structure and routine, and remember the importance of sleep, diet and exercise. These have been shown to be modifiable risks factors for developing depression or developing anxiety disorders. They are influences which young people can change and have some control over.”

In the module, Professor Ian Hickie explains that physical activity during the day is important in order for teenagers to sleep well at night. Also, kids tend to be sleepy until about 8 or 9 am due to naturally later bedtimes, so there is often a discrepancy between school timetables and the physiology of teenage brains.

Here are some tips for teens to promote a good night's sleep:

As Fuller reminds, there is no such thing as a sleep bank; just because you slept 10 hours one night doesn’t mean you can get away with sleeping only six hours the next night. 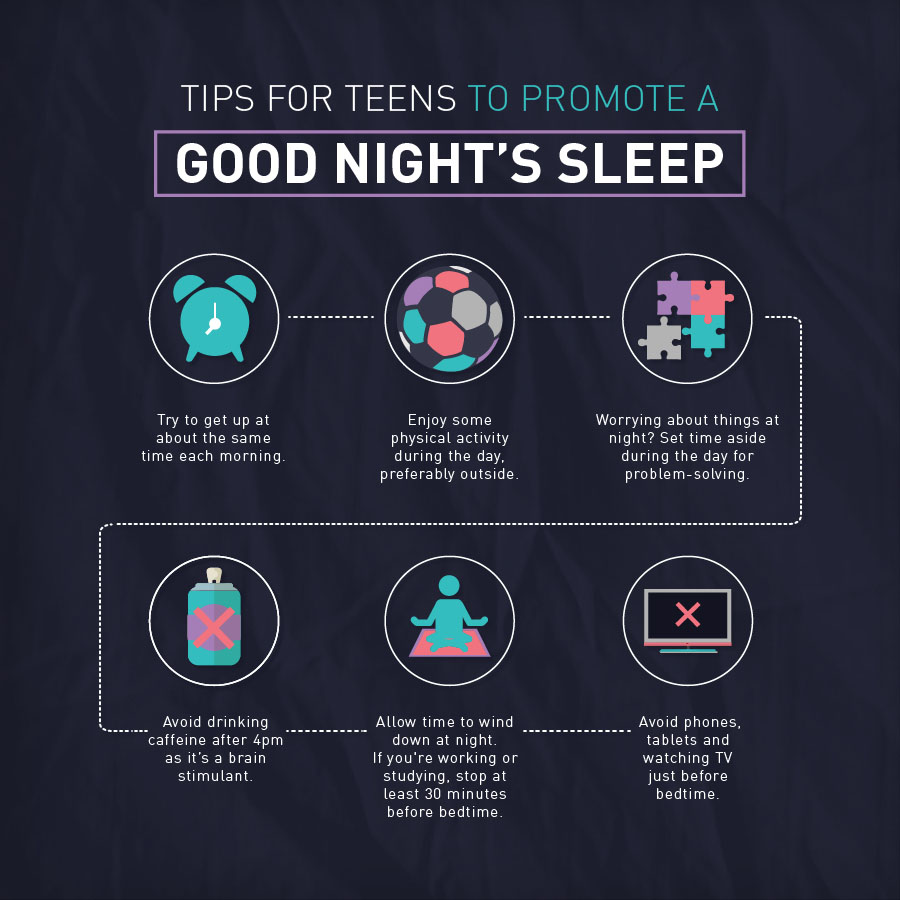